WhatsApp criticised over child safety as new update announced for 2021 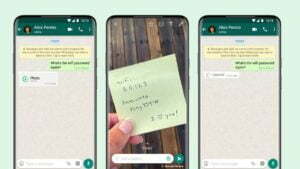 Users will now be able to share photos and videos that disappear from chats after being viewed once.

WhatsApp is part of Mark Zuckerberg’s social media empire which includes Facebook and Instagram and is used by millions worldwide.

The global messaging service will begin rolling out the new ‘View Once’ feature this week.

The update will allow users to share phots and videos that will disappear once opened by the recipient.

The company say the tool is a safe way to share sensitive information without it being saved or repeatedly viewable.

A number of other social platforms, most notably Snapchat and Instagram, already allow users to send messages which disappear after being viewed.

Read the full story from Times & Star below: