Thousands of pupils ‘easy prey for gangs’ when schools reopen 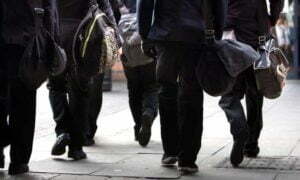 Ministers are completely unprepared to deal with the sharp rise in exclusions, and the subsequent exploitation of thousands of children, that could happen when schools reopen next month, the former children’s commissioner has said.

In a stark warning about the potential number of children who have fallen “off grid” since the start of the pandemic, Anne Longfield said that tens of thousands more children could be exploited by gangs and criminals because the state had failed to keep track of them.

In an interview with the Observer, she said she was concerned that a rise in the number of children apparently home schooled during the pandemic would also put significantly more children at risk. She said the scale of the problem would only become apparent with the return of schools in September, but warned the state was “absolutely not” equipped to deal with the problem.

“Tens of thousands of kids could be in this situation,” she said. “We’re way away from there being any kind of mainstream response. We’ve had the prime minister talk about how he was going to ‘bite the head off’ county lines gangs – this year, I think he was going to ‘throttle the life out of them’.