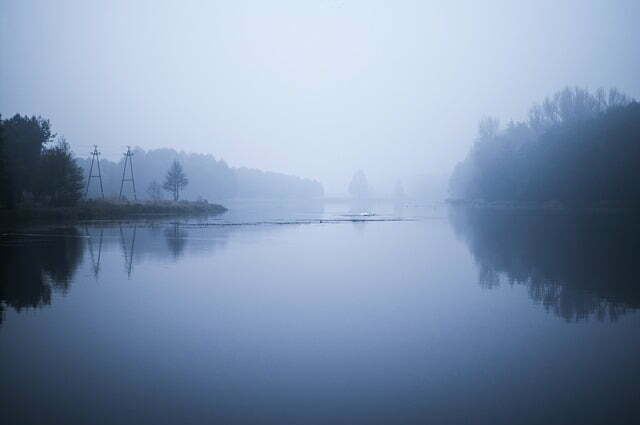 It is office party season. Whatever you do for a living, the likelihood is that if you will have some form of social event to celebrate Christmas and all your hard work during the year. For many it will be a full-on office party, whilst for others it might be a lunchtime meal or even a quick drink after work. It is often one of the highlights of the year particularly if your boss or company is paying. Many of us will unwind, let our hair down and drink far too much alcohol. For the majority, the worse thing to happen will be that we wake up the next day with a stinker of a hangover and maybe a regret about  an embarrassing situation we found ourselves in. However, for some people a social event can end in tragic circumstances. Each year there are many cases where people go missing following a night out. Whilst most people eventually turn up, there are far too many cases that end with a fatality.

In 29th July this year, 48-year Lynn Tyeson disappeared after a night out with friends in Dumfries. She had last seen around 3am. A police missing person investigation followed, but sadly three days later Lynn’s body was recovered from the River Neath, a couple of miles from her last known location. A few months later in the early hours of 19th September 18-year old Thomas Jones disappeared. Thomas had been on a night out in Worcester, having arrived in the city a few days early to take a teaching course. The police enquiry identified that at about 3.50 am Thomas had crossed the Sabrina Footbridge over the River Severn near to Worcester Racecourse. He had then followed a path alongside the river and at that point was only a few minutes from home.

For a variety of reasons, the case captured the attention of the national media and featured in all the main papers and online news resources. There was a social media campaign and hundreds of volunteers took part in the search for Thomas. West Bromwich Albion Football Club, where Thomas held a season ticket supported the campaign, and there was a candlelit vigil attended by hundreds of people. During the investigation the police arrested two men, who were later released without charge. Subsequently more than 17,000 people signed a petition calling for the council to place CCTV along the river bank in the city. Tragically just over a week later Thomas’s body was recovered from the Severn.

The most notable case in the last few years is the 2016 disappearance of Corrie McKeague who was last seen in the early hours of 24th September in Bury St Edmunds, Suffolk. 23-year old Corrie was a Gunner based at RAF Honington, about 10 miles away from the town. Corrie had been out socialising with friends and left a nightclub on his own. He was believed to be very drunk and made his way to a takeaway restaurant. The last known sighting was on CCTV at 3.24 am when he entered a refuse and loading bay area behind a shopping centre. The CCTV did not show him emerging from the area. The subsequent police search and investigation was extensive, costing Suffolk Constabulary a reported £2.1 million. Whilst there was much speculation in the media, the police eventually worked on the theory that Corrie had fallen asleep in the rubbish area, potentially in a bin which had been collected by a refuse vehicle. His mobile phone signal led them to a landfill site near Barton Mills, about 13 miles away. Initially the police didn’t search the site due to an ambiguity over the weight of the refuse vehicle that had collected the rubbish from the shopping centre bays. However, after some recalculation the constabulary spent a number of weeks searching the landfill site without success. It is believed that Corrie died in the lorry and his remains lay undiscovered in the site. The case attracted much publicity and some criticism of the police by Corrie’s family.

The exact number of fatal outcomes as a result of a night out per year is unknown. There is no data set to rely on to provide us with an idea of how prevalent this safeguarding issue is. Many of these cases do not attract the same widespread publicity that was present in the case above. Many are reported locally or not at all. Sadly, the loss of just one life is too many, but the likelihood is that this is a far too common problem. A study released this time last year gives us some insight.

Men Missing On A Night Out

‘Men Missing On A Night Out’ is a study, released by the Centre for the Study of Missing Persons at the University of Portsmouth. The report was published this time last year and presented at the National Missing Person Conference in London at the beginning of this year. The research looked at 96 fatal disappearances of men who were last seen socialising on a night out. It focussed on men because males were far more likely to end in fatalities than females who missing on a night out. The researched identified that “in comparison, women are more likely to return or be found alive”. However, the authors acknowledged that whilst cases involving women generally did not end in a fatality, some cases do. They suggested that further research was needed in this area.

The headlines from the report were:

The report was shared with the police and search and rescue organisations. The various news pieces that accompanied its publication were picked up by the media and widely reported under the “don’t drink and drown” campaign.

“Don’t Drink and Drown” is a yearly national campaign run by the Royal Life Saving Society UK (RLSS). Its aim is to warn people to act responsibly near water after they have been drinking. It encourages people to avoid walking near or entering bodies of water when under the influence of alcohol. 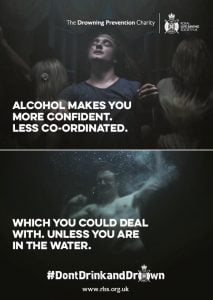 The society launched the campaign following a number of drownings involving students. There website identifies that between 2012 and 2016 there were on average 73 fatalities per year involving accidental drowning, where alcohol and/or drugs played a part. The impact of these tragedies on families and loved ones, cannot be over emphasised.

The ‘Don’t Drink and Drown campaign runs this year from 3rd to 9th December. Whilst we are a little late with this article, we urge all our safeguarding colleagues to visit the RLSS website and support them in their prevention work. A campaign pack is available.

Get home safely and thanks for reading