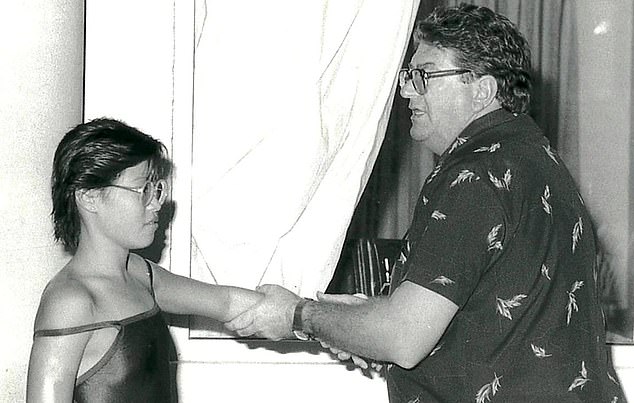 British sport is hit by another abuse scandal after teenage swimmers alleged they were bullied by former coach and suspected paedophile John Wright, who has been arrested overseas on multiple assault charges

By Robert Dineen and Craig Lord For The Mail On Sunday

British sport is embroiled in another abuse scandal after teenage swimmers said they were bullied by a coach who has been arrested overseas on multiple assault charges.

English swimming’s ruling body has been informed of a social-media support group set up by swimmers trained by the suspected paedophile John Wright, the Mail on Sunday can reveal.

It is understood that safeguarding officers with Swim England have been in contact with former swimmers who claim the Australian coach harmed them. This newspaper has also established that Wright was employed at the Kingston Royals club in London despite being convicted of assaulting the parent of a 13-year-old female swimmer a decade earlier.

Wright, who is in his late seventies, was arrested again in Australia last October and charged on nine counts of historical child sex assaults following a TV documentary. It interviewed multiple men who claimed Wright abused them while their coach in the 1980s.

A further 20 charges relating to indecent treatment of a child followed in February after more alleged victims came forward in Australia. He has also been accused of sexually abusing a teenage swimmer in South Africa shortly before he joined Kingston Royals in the late 1990s.

Teenage swimmers alleged they were bullied by coach John Wright, who has been arrested overseas (pictured: Wright with Su-Ling Ch’ng, whose mother he was convicted of assaulting)

No one at the club is known to have alleged sexual abuse. Their former swimmers formed the secret social-media support group on the common understanding that Wright had bullied the club’s athletes and, in some cases, they had suffered emotional problems as a result.

British Olympic sports have been tainted by multiple safeguarding scandals in recent years, with coaches alleged to have mistreated elite athletes in gymnastics, cycling and rowing.

Wright spent nine years at Kingston Royals. During his reign, they became the strongest club in the south of England, with at least two swimmers representing their country.

Most of the athletes under his tutelage at Kingston would have been under 16. ‘Swim England have had their child safety officers working on the Wright case since last year when it all blew up [in Australia],’ said a source, whose work is related to child protection in sport.

An online support group was set up by swimmers trained by Wright, a suspected paedophile

‘It would be their responsibility to check with Kingston whether there had been any complaints and concerns expressed. It’s my understanding that there had been and that those have not gone away.’

Wright was reported in February to be in custody in Brisbane. Nine counts of indecent dealing of a child and one count of common assault related to incidents that allegedly took place between 1980 and 1986.

Wright had coached his home country’s most talented young swimmers and was accused of abusing elite athletes including Shane Lewis, an Olympian; a second swimmer who was a former junior national champion; and Paul Shearer, who competed at state-championship level.

Both Shearer and Lewis contacted Swimming Australia regarding the abuse, in 2009 and 2016 respectively. Swimming Australia told Shearer it could not investigate because he had not filed a formal complaint. Lewis abandoned his pursuit of Wright, saying he felt ‘let down’ by his federation.

Shearer died in July 2020, with reports saying he took his life. Lewis died in February 2021 following a fatal prescription drug overdose at the age of 47.

The Australian Broadcasting Company documentary prompted a former South African junior swimming champion to come forward with allegations that Wright sexually abused him once or twice a week for six months in 1998, shortly before he joined Kingston.

Anthony Rocchi, who had known Wright since the age of 11, was 18 at the time and lived with the coach while preparing for the World Championships in Hong Kong.

‘He would abuse me before and after my races, the trials for the World Championships,’ Rocchi. ‘When I got to the trials, my psychological state was just so weakened that I couldn’t post the same times that I had swum for four or five weeks prior.’

The Kingston Royals support group was formed before the second set of charges were made against Wright in February, nearly 14 years after he bid farewell to the club at the National Championships in Sheffield in August 2008.

Eight of his swimmers, ranging in age from 12 to 17, posted personal bests at the event. Afterwards Wright said: ‘Spending time in Sheffield was a wonderful experience. Watching our young swimmers, who have been taught to swim and race, starting at the age of five through the club’s coaching programme, was a very proud moment. They are now among the best in the country.’

It is understood, however, that his departure was abrupt and came without much explanation, leaving others perplexed.

One coach, who worked at a neighbouring club to Kingston said: ‘I first met Wright at a club competition at Crystal Palace and got to know him reasonably well.

‘He was a typical tough-nut Australian, a bit aggressive and not someone I liked that much but there was nothing to suggest he was doing the stuff he’s been charged with.

‘You think you know people, but this stuff is terrible. When he left, we never found out why; he never said goodbye to any of his fellow coaches. All we knew was that he was there one minute and gone the next. Now, we wonder what might have happened.’

Wright was employed at Kingston even though he had been convicted in 1986 of assaulting the parent of a 13-year-old swimmer under his charge in Brisbane.

The Australian press reported how Wright was released on a 18-month good behaviour bond after he was found guilty of assaulting Cindy Wee, the daughter of Singapore’s then president Wee Kim Wee, and mother to Su-Ling Ch’ng.

Bill Sweetenham, the former British national team coach, was Australia’s national youth coach at the time. It is not known whether he was aware of Wright’s conviction on taking over the British team in 2000. Sweetenham, who was later cleared of bullying British swimmers following an investigation, had considerable success with its national team before leaving the post in 2007. He was approached for comment.

Swim England said in a statement: ‘The welfare and wellbeing of all Swim England members is of paramount importance and we are committed to ensuring that all who take part in our activities are able to participate in an environment that safeguards them from harm.

‘Swim England encourages any individual who has concerns relating to this or any other safeguarding matter to contact us. Individuals can also contact police, Crimestoppers or the NSPCC Child Protection Helpline.’

Kingston Royals did not respond to requests for comment.

British sport has been caught up in, and dogged by, several abuse scandals in recent years