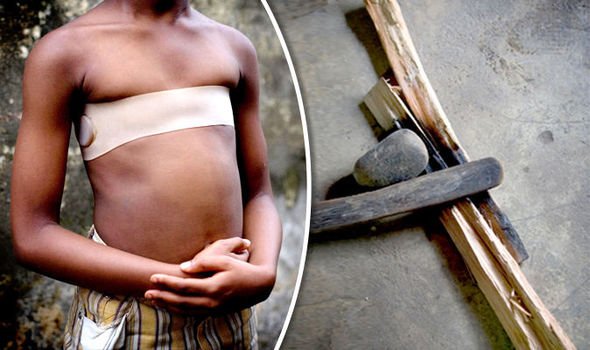 Breast flattening is an age-old tradition, practiced in certain parts of Africa. The pounding and massaging of a girl’s breasts to delay breast development. In the UK it is child abuse. Read this guide to find out more.

What is Breast Flattening and Breast Ironing?

Breast flattening (often called breast ironing) is the pounding and massaging of a young girl’s breasts, to prevent and stunt breast growth. It is usually carried out by pressing, massaging or pounding the breasts using hard or heated objects.

Why does it happen?

Breast flattening is traditional practice in parts of West Africa. It is typically arranged or performed by the girl’s mother, to make the girl less attractive to males by delaying the signs that the girl is maturing into a young woman. Reasons for this include, protecting the girl from sexual harassment and rape. It also carried out to discourage pre-marital sex, unwanted pregnancy and prevent early marriage. Often one of the drivers is that the mother will want her daughter to avoid pregnancy so that they receive an education.

Where does it occur?

Breast flattening is widespread in Cameroon and also takes place throughout other parts of Africa. Countries include: Benin, Chad, Côte d’Ivoire, Guinea-Bissau, Guinea, Kenya, Nigeria, Togo. There have also been reports that the practice can be found further south – Zimbabwe and South Africa.

How prevalent is it?

Because breast flattening is a hidden practice, it is difficult to establish how prevalent it really is. The UN estimate that nearly 4 million girls are affected, whilst other research identifies that in Cameroon alone, 1 in 4 girls has undergone the process. This would significantly increase the UN estimate.

The practice usually starts when a girl begins to develop breasts, generally affecting pubescent girls aged between 8 and 12 years of age.

How is it carried out?

There are several methods to iron or flatten the breast, often determined by the area or region where it takes place. A pestle or grinding stone are the most commonly used tools. Typically, the preferred tool will be heated in a fire or boiling water until very hot, then applied to the breast. The object will then be pressed, pounded and massaged into the breast for several minutes. Once the object cools, it is placed back into the fire and reapplied when hot enough. Once the massaging has finished, the breasts are often tightly bandaged or bound by a belt (or other restrictive material). The pounding or pressing can continue daily, sometimes twice a day for several months until the breasts have dropped or not developed.

Whilst normally performed by the child’s mother, other female family members can perform or assist in the practice. In some cases, male members of the family, healers, elders and other members of the community may become involved. Given that the act is excruciatingly painful, it is likely that the child will need to restrained.

What are the health implications?

Apart from the severe pain, the practice causes:

Whilst there is limited information available about the long-term effects of breast ironing, experts warn that it could lead to the development of cysts, skin and breast cancer.

Does it happen in the UK?

Despite occasional stories in the British press with headlines like “hundreds of UK girls subject to breast ironing”, no one knows how widespread it is in the UK. It is a hidden crime, taking place in private and where the victim is unlikely to report their mother or family member. Whilst there are no official police or government figures, it is widely accepted that it has been brought to the UK and is practiced amongst those communities that have now settled here.

There has been concern from the Home Office that safeguarding professionals might be reluctant to engage and challenge families and communities, because of cultural sensitivities. This may have happened in some cases, but rather than throw around unhelpful comments, it would be more beneficial for the government to launch an awareness campaign aimed at safeguarding professionals. They could also look at whether specific legislation is required, for whilst there is no specific law on breast ironing, it is child abuse. If practiced in the UK, the perpetrators are subject to other UK laws – assault (likely to be grievous bodily harm) assault and child cruelty. A campaign and some investment by the government, would go a long way to empowering professionals to be confident around identification, the law and the safeguarding measures they need to take.

Missing Children – The role of the Police (updated 2022)

Police are the lead agency when a child is reported missing. In this article we take a look at their role and what procedures they should follow to locate a child safely.

Age related milestones that are relevant to safeguarding children – a guide.

Missing Children – what you need to know

Here we outline the reality and scale of missing children in the UK, we also outline the expectations on all those involved with a child when they go missing

As we approach National Child Sexual Exploitation Awareness Day on 18th March, we produce the first of three practical factsheets for safeguarding professionals. Part 1 looks at the methods used by perpetrators, risk levels and the law.